“You can imagine that a person like myself—who is proudly, openly gay, who has reached the halls of power, who has finally managed to get a seat at the table. You can now imagine how hated I am and how much of this hate speech is directed towards me.” 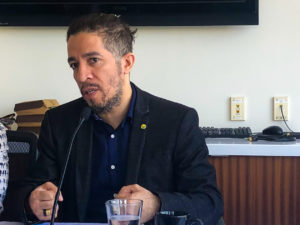 Jean Wyllys speaks in Washington, D.C. about the discrimination he has faced at the hands of anti-LGBT President Jair Bolsonaro. Photo by Lily Folkerts.

Jean Wyllys gave powerful testimony regarding the discrimination he has faced at the hands of anti-LGBT President Jair Bolsonaro and his followers at a public event at the Washington Office on Latin America in Washington, D.C. Jean is an Afro-Brazilian, openly gay, former federal congressman from Rio de Janeiro. First elected to Congress in 2010 on a platform supportive of LGBT and minority rights, he was forced to resign and flee Brazil for his safety after Bolsonaro won the presidency in October 2018. At the event co-hosted by Latin America Working Group (LAWG), Center for Economic and Policy Research (CEPR), the Washington Office on Latin America (WOLA), and Amnesty International USA (AIUSA), Jean shed light on how Bolsonaro and hate speech came to power, the diverse populations they attack, and what YOU can do to help.

Jean has withstood attacks from Bolsonaro for years. They served together in Congress, and Jean recounts how every day he “was routinely insulted with terms that I would dare not repeat here.” For Jean, their personal history serves as a reminder that Bolsonaro has been an active public figure for the last 30 years, all the while spewing hate speech like “a virus infecting the political scene in Brazil.” His ascension to the presidency demonstrates Bolsonaro’s ability to capitalize on current societal tensions that are a result of Brazil’s complicated and diverse history.

And it’s not just Jean who has faced hateful discrimination for sexual orientation. One of Brazil’s first trans women elected to Congress this past October, Erica Malunguinho, has endured prejudice. “There is a whole debate over what restroom she should use in Congress,” explained Jean. “One of her colleagues spoke in the House about the bathroom issue saying that, if he ever saw a trans women using the same bathroom as his wife, he would forcibly kick her out.”

While LGBT rights are under constant attack from the Bolsonaro Administration, they’re not the only ones. For Jean, it is important that all these rights—for women, Afro-Brazilian, indigenous, and poor and working class people—not be isolated. “All of those minorities are targeted in the [hate] speech… instead of uniting to find a complex solution to a complex problem, we end up being divided and allowing figures such as Bolsonaro to triumph.”

Jean says there’s a lot the international community can do to help: Listen to Brazilians and understand the situation they are facing. Share this information with our friends and family. And talk to members of the U.S. Congress—ask them to sign dear colleague letters and publicly speak out against hate speech and rights-violating actions by the Bolsonaro Administration.