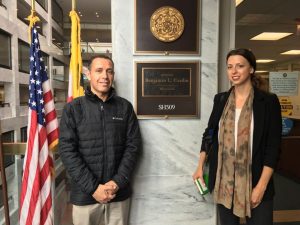 Javier with Lena Weber from Peace Brigades International Mexico after a meeting with Senator Cardin of Maryland. Photo credit: PBI

LAWG sat down with Javier during his trip to discuss the challenges that his organization faces as a direct result of U.S. policy towards the region. He stressed that the current wave of migration occurring throughout the Americas is different from migration patterns of the past. In previous decades, most migrants trying to enter the United States were single adult males with economic motivations. Javier shared that the demographic of migrants has shifted to include more families and children fleeing their home countries due to a lack of security and fears for their safety. He added that approximately 80% of the people hosted by Casa del Migrante can be considered refugees or victims of persecutions in their home countries. This means they are guaranteed protections from other countries under international law, reflecting an urgent humanitarian need in the current crisis.

While the people approaching the U.S. southern border are more vulnerable than ever before, the Mexican government has reacted to them in increasingly harsh and inhumane ways. In 2019, the government created the National Guard, which Javier explained acts as a militarized police force throughout the country. Agents from the Coahuila state attorney general’s office killed a Honduran migrant near Casa del Migrante in July of 2019, and the Saltillo police and National Guard have attempted to conduct illegal migratory checks on the shelter’s premises. In addition to these attacks against migrants, Casa del Migrante faces threats and harassment from organized crime groups, security forces, and public officials. Javier’s descriptions of these attacks showed that he and other employees face a growing daily risk for doing their jobs.

Javier expressed that all of the actions against the shelter and the migrants it helps are attempts to discredit and delegitimize their work. This pressure is not arbitrary or without cause; it is a direct result of the Trump Administration’s efforts to prevent migrants and asylum seekers from accessing the United States Because of the mounting tensions, Javier now sees his job as one of education–publicizing the threats faced by Casa del Migrante and asking for help from other NGOs, including those working on migration advocacy in the United States. He hopes that these organizations will post on social media and write letters to U.S. lawmakers emphasizing the precarious security situation due to the dangerous immigration policies currently in place. We call on the governments of the United States and Mexico to respect the rights of migrants and asylum-seekers, as well as to protect the civil society organizations and defenders providing them with critical aid.