Voces from Colombia: From a Group Chat to a Political Movement, Defendamos la Paz 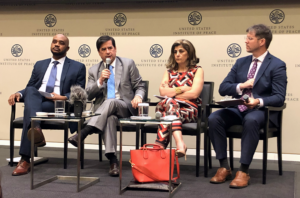 Leaders from Defendamos La Paz speaking at the U.S. Institute for Peace.

What started as a mere WhatsApp chat to share opinions and perspective regarding the implementation of the peace agreement in Colombia has now turned into a national citizen movement for peace.

Representatives of this rising movement gathered at the U.S. Institute of Peace on July 19th to share their thoughts on the future of this new movement, called Defendamos la Paz. What makes this manifestation of those in support of peace so unique besides the fact that it sprung up from a WhatsApp chat? For starters, Defendamos la Paz is incredibly diverse in all aspects. Those involved are young and old and range from politicians and ex-combatants to artists and students. The movement has little formal structure, as it was “never the intention of the chat to become a peace movement,” shared Laura Gil, a columnist and one of the members of Defendamos la Paz.

Despite the original intentions of the WhatsApp chat, Defendamos la Paz has certainly made itself known since its founding in February 2019. Its statements are having an impact on the Colombian media and debate. As Laura added that “most of its leaders have their own full-time jobs,” this impact is impressive.

But, the movement’s “real ‘test’ is July 26th,” insists Laura Gil. On Friday, Defendamos la Paz will be hosting a march for the lives of social leaders across Colombia. Countless social leaders have lost their lives in their advocacy for peace in Colombia. As these social leaders are an integral part of the peace process, it is important to protect them at all costs. This is why the march on Friday is so important.

In addition to supporting the lives of social leaders, Defendamos la Paz supports guarantees of protection for ex-combatants who put down their arms. The movement started in order to protect the transitional justice court, known as the Special Jurisdiction for Peace, from the government’s efforts to change it in ways that undermined the peace accords. The movement has also urged the last major guerrilla group, the ELN, to establish a unilateral ceasefire as a sign of goodwill, and has urged the government to remain open to negotiations. It is also campaigning to collect a million signatures calling for the victims’ representatives to be able to take their seats in the Congress, a peace accord promise so far denied.

Juan Fernando Cristo, a former senator and minister of the Interior now active in Defendamos la Paz, emphasizes that “today there is much more support [for peace] than when [Colombia] had the referendum” in 2016, and to take advantage of this rise in support, the organization is working to “create a space for the continuation of the implementation” of the agreement.

Cristo also added that the movement puts on display the new, unique ability of “social media sites and new technology” to organize different groups of people together behind a common cause. Defendamos la Paz is a part of the new style of social movements rising from the bottom up.

How can you support Defendamos la Paz from wherever you are? The movement is incredibly active on Twitter, where they publicize their official statements. Follow the march this Friday, July 26th, using the hashtag #Julio26ElGrito and see if there is a corresponding march where you live. Defendamos la Paz is doing vital work to support full and lasting peace in Colombia, along with many other advocates for peace across the country. It is crucial that we do everything that we can to support valiant Colombians working for a just and lasting peace.