Voces from El Testigo: Forgiveness, Peace, and Hope in Colombia 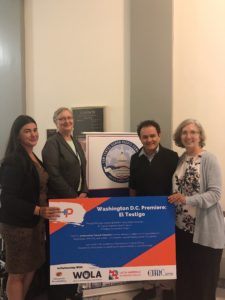 Forgiveness, peace, and hope are words not commonly associated with the past 50 years of conflict in Colombia. However, these themes shine through in the new documentary El Testigo (“The Witness”).

El Testigo, produced by Caracol TV, tells the story of Colombia’s horrific internal war through the lens of Colombian photojournalist Jesús Abad Colorado’s camera. Years after documenting this conflict with photographs and powerful reflections, Abad sets off to find his photographed subjects to learn about where their lives had led them since taking their photo many years before.

In September, LAWG had the opportunity to welcome Abad  to the D.C. area for two unique screenings of El Testigo. The film’s first screening at the E Street Cinema was hosted by the Alliance for Peacebuilding, along with LAWG, the Washington Office on Latin America, and the Colombia Human Rights Committee.

Guests, including a member of the National Afro-Colombian Peace Council and a leader of women whose family members were killed by the military—the Madres de los Falsos Positivos (MAFAPO), talked to the audience afterwards. Many members of the D.C. Colombian community were in attendance, sharing personal anecdotes of the conflict and contributing to the conversation towards peace and reconciliation.

“Those conversations reveal the strength of Colombians, their capacity for resistance and their openness to the possibility of forgiveness and reconciliation. They are conversations that make peace seem within reach. Yet the official peace process–the formal peace accord reached in 2016 between the Colombian government and the FARC guerrillas–is fragile. Implementation has been slow and uneven. Key components like the transitional justice system and political participation by former guerrilla leaders have come under constant attack. Human rights defenders, community organizers, Afro-descendent and indigenous leaders and demobilized guerrillas are being killed systematically.”

When the lights came on abruptly after the film, it was clear that El Testigo had  moved the audience, which included congressional staffers, interns, and members of the media.

See it for yourself! El Testigo is now available for streaming on Netflix.