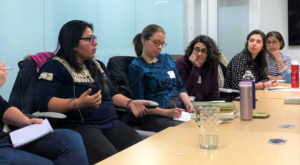 When the first migrant caravan from Honduras broke U.S. news last November, we answered your most pressing questions with, The Migrant Caravan: Just the Facts. But a lot has happened since—crackdowns by the Mexican government, growing xenophobia in Mexico, and pressure from the U.S. government. That’s why one of our partners, Brenda Elodia Ochoa, the Director of Centro de Derechos Humanos Fray Matías de Córdova A.C. (Fray Matías), a Mexican human rights organization that has been working on the protection of the rights of migrants and refugees for years, came to D.C. in March. She provided firsthand information about the current state of Mexico’s southern border and migrants’ protection needs as they cross into Mexico. Here’s what she said.

This first caravan that left Honduras in November and arrived at Mexico’s southern border had a strong sense of collective identity, “colectividad de base,” according to Brenda. Since then, the number of migrants that Fray Matías has seen at Mexico’s southern border has increased. Last year, the caravans were received with open arms by Mexicans—what Brenda views as a show of Latin American solidarity. 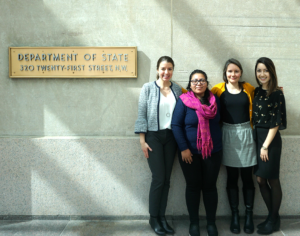 Daniella and Lily with Rachel (KIND) and Brenda (Fray Matías) at the State Department. Photo by Ethan Young.

But Brenda said it is not the same situation for the caravans that have since followed. The open arms of both the Mexican government and people have been closing. Many migrants are being deported without the chance to even ask for asylum. And those who are able to do so find delayed processing times and bureaucratic processes that are difficult to navigate if organizations like Fray Matias don’t provide them with legal assistance. Unaccompanied children and adolescents, in particular, are being detained and deported. And these adolescents, often escaping from gang violence in their home countries in Central America, are being criminalized and profiled as gang members—when in reality they’re fleeing from them. She senses that the local response has also changed—many Mexican communities are no longer as welcoming as they were in the past, making it difficult for migrants to receive assistance. And nongovernmental organizations, like Fray Matías, that have been trying to fill the gaps, are unable to completely do so. They lack resources and capacity to accommodate the numbers of migrants.

And pressure from the United States to Mexico to step up its enforcement is having a negative impact on the rights of migrants and asylum seekers, too. Brenda said that the truth is that “nuestras políticas son el reflejo de sus políticas”—our policies are a reflection of your policies. It’s important that both the Mexican and U.S. governments recognize the caravans for what they are—not a security threat but a means of survival. The exodus of Central Americans fleeing in caravans is not just a product of the insecurity and instability of their home countries, but also of the extreme danger of making the journey north. LAWG urges both governments to respect the rights of these migrants and asylum seekers.