“Without Justice, Bloody Histories Have a Way of Repeating Themselves” 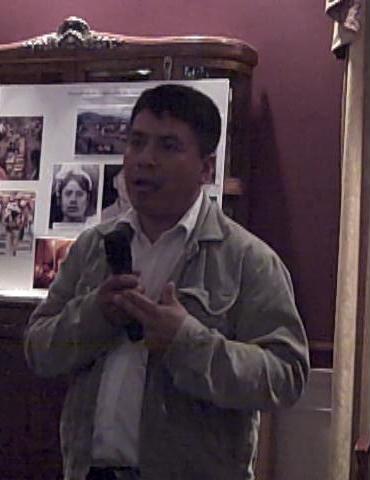 The pursuit of justice “is a challenge that we have been called to take on, and we have no idea how far this journey will lead us,” said Guatemalan human rights defender Jesús Tecú Osorio at a reception in his honor on May 17th, 2010. Human Rights First and the Guatemala Human Rights Commission (GHRC) organized this gathering to celebrate Tecú’s selection as winner of the 2010 Roger N. Baldwin Medal of Liberty Award for international human rights defenders.

From “a pool of 50 extraordinary human rights activists from around the world,” Human Rights First selected Tecú for this prestigious award. It honors not only his longstanding commitment to attaining justice for crimes committed during the era when 250,000 mostly indigenous Guatemalans were massacred, but also his work advocating for the rights of indigenous Guatemalans today. In a press release, Elisa Massimino, Human Rights First President and CEO, highlighted how “instead of seeking revenge, Jesús channeled his energies into pursuing justice… and working to secure a more peaceful future.”

Tecú’s story begins in 1982 in the Mayan community of Rio Negro. At ten years old, Tecú saw his parents, his two-year-old brother, and the vast majority of his community murdered at the hands of Guatemalan military and paramilitary forces. Although the massacre occurred over 25 years ago, surviving community members like Tecú are still seeking justice and reparations. At the reception, Amanda Martin, executive director of GHRC, described her first visit to Rio Negro:

“[I remember] staring down into the pit where 177 bodies of women and children were thrown, listening to the testimony of Sebastian, who is a survivor of that massacre, feeling the weight of the history of Guatemala, of what happened in 1982, and recognizing that this was 27 years ago, [and] people are still seeking justice. Three people have been put in prison, but no one who was part of this strategic extermination and genocide of the Mayan people has been held responsible for the crime. This is egregious.”

Tecú is well aware of the risks his work entails. He also realizes that achieving justice is a difficult and slow process. In his speech at the reception, Tecú acknowledged the continued lack of justice for both the victims of genocide and the families that survive them to this day:

“We have called for justice in Guatemala for almost 20 years, but we still have not been able to accomplish our major goals. When we denounce the authors of these atrocities, the government often loses the evidence. The proof, the testimonies disappear in the Attorney General’s office.  We have done so much. We have written books and made declarations. Even people from outside of the community have done studies; but still, we do not advance toward justice. We continue because we know that without justice, bloody histories have a way of repeating themselves.”

Despite all the obstacles, he still believes that they will succeed. “The hope we have is that we are alive. We have great faith that one day there will be justice in Guatemala, that the authors of the massacres will pay for their crimes. At the beginning, we thought that only the people who physically committed the crimes, the ex-paramilitaries, should carry the blame. However, we have realized that this is not the case. They were acting as part of a larger plan to exterminate an entire group of people. Now we call for justice with this reality in mind.”

With this hope, Tecú continues to work tirelessly to shape Guatemala’s future. “We are not asking for justice alone. We are also working to find opportunities for indigenous Guatemalans, especially the youth. We want children to have the opportunity to study because knowledge opens new doors and provides more possibilities for understanding the reality in which we live.” He has created three organizations to help make these dreams a reality: The New Hope Foundation/La Fundación Nueva Esperanza, The Association for the Integral Development of the Victims of Violence, Maya-Achí (ADIVIMA), and Rabinal’s Community Legal Aid Clinic.

In great humility, Tecú stressed the importance of his receipt of the Roger Baldwin Award and of the reception at which he spoke. “These activities help us commemorate our relatives and friends whose bodies disappeared in Guatemala. This award will do much to strengthen our fight for justice. With this award, we can say that we continue the process of seeking reconciliation and forgiveness in Guatemala.”

Tecú receives this award at a critical moment, when paradigmatic genocide cases are finally starting to move forward in the Inter-American and Guatemalan courts. To learn more about what you can do to support Jesus Tecú and other brave human rights defenders in Guatemala, click here.