The Advocate: We Are Made for Peace, Not for War, Says Colombian Indigenous Leader

As peace in Colombia comes closer to being a reality, the U.S. government, which for so long supported all-out war, must be prepared to finally support peace. As part of our efforts to press the White House and Congress to make this change, the Latin America Working Group Education Fund (LAWGEF) co-sponsored a delegation of victims of Colombia’s internal armed conflict to discuss the rights of victims and their proposals for achieving a just and lasting peace. Their stirring words came just before the discussion on victims’ rights opened in August 2014 at the negotiating table in Havana, Cuba. The delegation, co-sponsored by the Washington Office on Latin America (WOLA), consisted of Luis Fernando Arias, president of the National Indigenous Organization of Colombia (ONIC); José Antequera Guzmán, cofounder of Sons and Daughters of Memory and Against Impunity and son of slain political activist José Antequera; and (via video) Clara Rojas, newly-elected representative in Colombia’s National Congress, who had been kidnapped and held captive for years by the FARC guerrillas. At an event sponsored by our organizations and the United States Institute of Peace (USIP), the panelists discussed their peace proposals for the on-going peace talks in Havana. This is what Luis Fernando had to say: 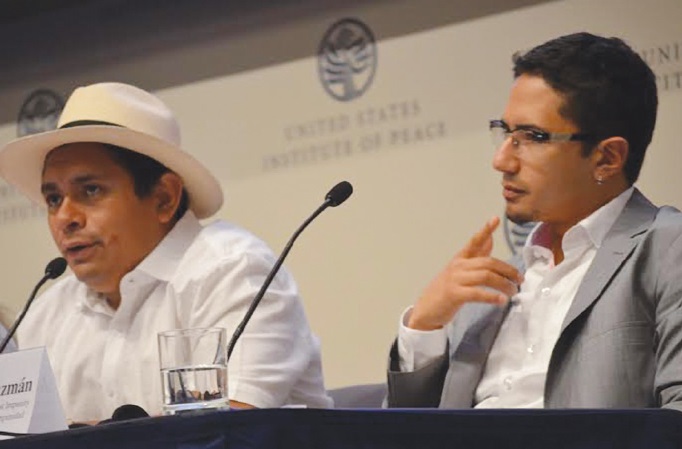 My name is Luis Fernando Arias and I am part of the Kankuamo indigenous community of the Sierra Nevada of Santa Marta in Colombia. The Kankuamo community has been one of the hardest hit by the armed conflict. During the span of ten years, we have had to bury close to 385 indigenous leaders who were murdered by paramilitary groups with the support of the Colombian military. Unfortunately, persecution and suffering is not new to the indigenous communities of Colombia. Since 1971, 3,000 indigenous people have been murdered; 150,000 have been internally displaced; and thousands more have been forcibly disappeared.

The indigenous communities of Colombia have been fighting for peace in Colombian for 523 years and, despite all the setbacks, we have not faltered once. Our dream is that one day our lands will be transformed into sanctuaries of peace, which is why we view the ongoing peace talks in Havana with great enthusiasm. Despite the fact that the end of the conflict is being negotiated in Havana, the war continues to ravage the ancestral lands of indigenous and Afro-descendant communities. Our men, women, our children are still paying the price for the continuation of this war: they are being raped, displaced, forcibly disappeared, murdered, bombarded, and recruited as soldiers by all armed actors.

Nonetheless, we are still committed to finding a peaceful solution to the armed conflict. We feel that this is the right moment to end a fifty-year long conflict which has claimed the lives of 220,000 Colombians. We believe the end of the armed conflict must come through a negotiated, political end, not through more war. In the fifty years that the armed conflict has been going on, neither the state nor the guerrillas have been able to successfully seize power. So tell me, what good is more war going to do?

We also think that humanitarian zones should be declared throughout Colombia. There are tribes in Colombia that are on the verge of extinction. Take for example the Nukak-Makú people, who were the last-known nomadic tribe in Colombia. In 1988, the tribe had approximately 2,200 members; today that number has been drastically reduced to 400. The fighting between drug traffickers, guerrillas, paramilitary groups, and the Colombian army has displaced the Nukak-Makú from their ancestral lands. There are 34 other communities who, like the Nukak-Makú, have fewer than 400 members and are in danger of disappearing.

We have many concerns regarding the aftermath of the conflict, including the demobilization and reintegration of ex-combatants from all armed groups and the large tracts of lands that have been scattered with anti-personnel mines. We believe certain mechanisms should be created to solve these issues. Our greatest fear is that once a peace accord is signed, these issues will remain unresolved. What is worse is that the Colombian government does not know how it will handle this situation. The lack of a clear solution to these two problems worries us because we fear that they might generate internal problems within the indigenous communities later on.

The support of the United States and the international community is of the utmost importance to this peace process. We ask that U.S. aid to Colombia shift its focus away from military aid and be reoriented towards humanitarian aid instead. For fifty years, the main focus in Colombia has been war; from now on it must be peace and reconciliation. The United States should not keep pouring more money into Colombia to strengthen its military institutions. It should instead try to generate conditions where peace and reconciliation can thrive so that one day we can finally attain truth, peace, reconciliation, and a guarantee that the crimes of the past will not be repeated.