We Resist with Art, Hip-Hop and Dance 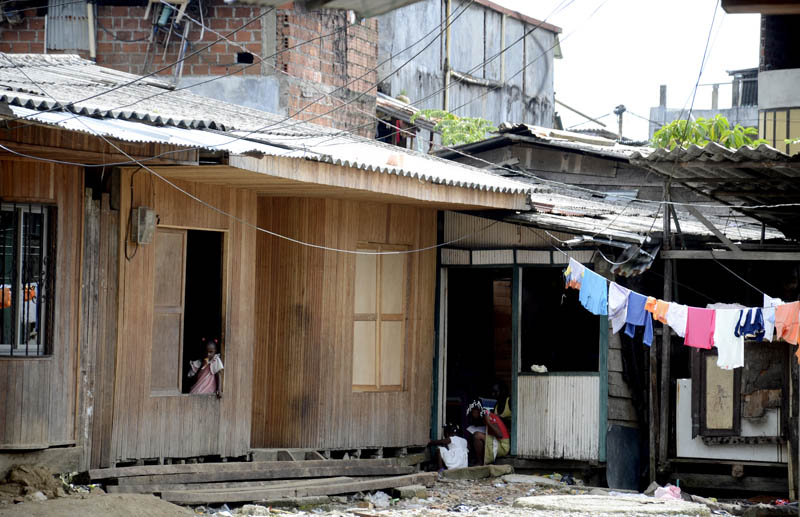 Many of the displaced residents of Buenaventura live in the La Playita neighborhood. The homes sit on stilts over the water, and the roads usually flood in the daily rains. (Christian Fuchs — Jesuit Refugee Service/USA)

(Buenaventura, Colombia) May 21, 2012 — Between the Western-most range of the Colombian Andes and the Pacific Ocean in the Department of Valle de Cauca lays the city Buenaventura — Colombia’s principal port city and also one of its deadliest.

While there are few international headlines that highlight the ongoing nearly 50-year-long armed conflict, Buenaventura has received massive numbers of displaced Colombians in recent years fleeing violent displacement by armed groups. Buenaventura also has one of the highest rates of intra-urban displacement, and struggles with a 60% unemployment rate.

The city has become an important strategic location for both guerillas and paramilitaries seeking to capture valuable routes for the shipment of drugs, arms, gold, and other resources along the multitude of rivers that surround the city and empty out into the Pacific port.

The fear and violence gripping Buenaventura is palpable as we walk through the neighborhoods hosting the displaced. The victimization of these communities is confirmed in meetings with our Jesuit Refugee Service colleagues, humanitarian organizations, Catholic Church partners, displaced residents, leaders of the local community and other NGOs.

We meet with one couple, Don Jose* and Doña Diana*, displaced on three different occasions from their farm in the northern region of Valle de Cauca during the last 11 years by FARC guerillas and by a paramilitary group. During their last encounter with a paramilitary group, Don Jose was kidnapped and tortured; his wife, seven months pregnant at the time, searched frantically for her husband while he was held.

As the couple begins to tell their story they each begin to cry, each trapped in their separate pains, still living the nightmare of their separation, of the terror, of the fracturing of their family and their faith; they are unable to offer comfort to one another.

“I lost my baby two months after she was born. I blame the stress of our trauma. I blame myself for her death,” Doña Diana explains.

Don Jose meanwhile is still caught in the nightmare of his torture, repeating in incoherent gasps the details of the ordeal he has conveyed to his wife and children countless times before. Their case, a psychiatrist who counsels the family explains, is emblematic of the trauma that haunts many of the displaced in Buenaventura. The continued violence within the town and the dearth of resources for the affected individuals prevents these torture and trauma survivors from reaching full recovery even years after the underlying events occurred.

We learn that paramilitary groups, including the Black Eagles and the Rastrojos, control sectors of the inner city of Buenaventura, while the rivers and rural areas surrounding the town are controlled principally by the FARC. On the outskirts of the city we find that illegal mining has become an endemic problem, linked to the illegal armed groups and causing environmental devastation while displacing families from their land.

The Zaragoza goldmine minutes outside of the town is allegedly controlled by the Rastrojos. The government is said to have shut down the mine on three different occasions but the mining equipment reappears and the mine is up and running again within a week of these government actions.

Leaflets announcing the presence of all of these illegal armed groups regularly appear on the doorsteps of residents of Buenaventura’s poorest neighborhoods, and targeted assassinations of community leaders and forced disappearances are on the rise.

Pamphlets distributed by the Black Eagles have been of particular concern as they appear to be specifically targeting women and girls for violence, specifying the types of clothes women may wear and how late they may leave the house at night. Our office has documented a surge in threats and violence specifically targeting students, community leaders, teachers, and those agitating for land rights or restitution.

The armed groups continue to demand vacunas, or war taxes, from the residents of the town and those who refuse have been murdered, raped, or disappeared. Of particular concern is the targeting of youth and children who are ripe for coercion and recruitment by the illegal armed groups.

The arts of resistance

We meet with a group of young artists, Afro-Colombian men and women in their twenties who are leading a movement to resist violence and displacement. JRS has partnered with this organization in an effort to prevent the use and recruitment of children into armed groups.

Calling themselves Faces and Footprints, this collective of Afro-Colombian musicians, poets, and painters inaugurated their organization after a brutal massacre of athletes and artists in the Punta del Este community of Buenaventura. One of the artists describes with horror the kidnapping and dismemberment of the young community leaders of this neighborhood.

“We decided we must find a way to resist,” says one of the founders of the collective, “We use music, art, poetry, hip-hop and dance. Our goal is to show the young people of our city that there are better people to admire than the guerillas, gangsters, and paramilitaries who run our town. We resist. We resist the violence. We fight for peace. We call on the pride we have in our ancestors who were once enslaved but who built this city. This is our home, and we want a brighter future — a future free of femicide, of racial injustice, of displacement. We don’t believe that is too much to ask.”

Two of the artists treat us to spontaneous performances — a spoken-word tribute to the Afro-Colombians who resisted slavery and subjugation, and a rhythmic verse calling for peace and justice. The members of Faces and Footprints are leading an outreach effort to elementary aged children in Buenaventura, employing audio-visual tools to teach children about their right to live in peace and free from fear.

Invoking the legacy of deceased Colombian Bishop Gerardo Valencia Cano, whose life’s work centered around inclusion and justice for Afro-descent communities in the Pacific Coast of Colombia, the members of Faces and Footprints express their hope for a future free of the cycles of violence and poverty that have undermined opportunity in Buenaventura.

They struggle for a Buenaventura where their voices are valued, where they are free from the horror of massacres and targeted assassinations, and liberated from the constant encroachment of government-sponsored development projects that would likewise leave their communities disenfranchised and homeless.

“We seek to give voice to our reality,” says another founder of the group, a young woman in her late 20s.

Their mission strikes me as particularly important in the climate of fear created by the armed groups here, where assassinations, disappearances, and campaigns of terror have produced spaces of strained and bitter silence.

* Their names have been changed for their protection.