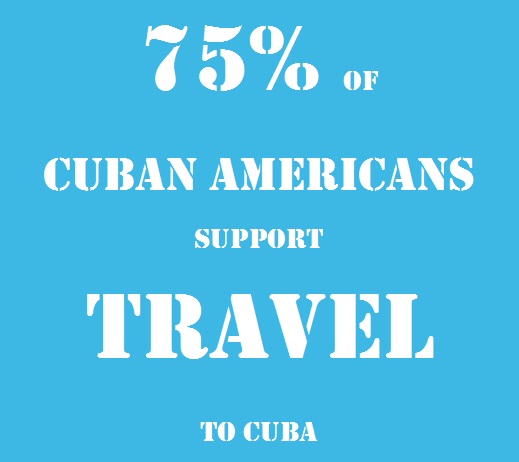 As Cuban Americans for Engagement (CAFE) explained in their press release, “Section 124 would effectively dismantle the “people-to-people” licensing program, allowing American citizens to travel to Cuba for educational purposes, by defunding the program. These licenses have allowed U.S. citizens to legally visit Cuba and experience the island first-hand, ending their reliance on the skewed portrayals of Cuban reality by either the U.S. government or the corporate-controlled media.”

The most absurd provisions of this bill are in section 125 and are “particularly disturbing because they negatively affect thousands of Diaz-Balart’s own constituents and their families in Cuba by requiring OFAC to monitor and report details on Cuban American travel to Cuba and on all remittances carried to Cuba, whether by Cuban Americans or others,” says CAFÉ. According to the 2010 Census, that is about 273,875 constituents, 33.9% that identify as Cuban, in Rep. Diaz-Balart’s district.

While members of congress like Reps. Mario Diaz-Balart, Ileana Ros-Leithen, Albio Sires, Senator’s Marco Rubio and Bob Menendez continue to speak out on “behalf of the Cuban people and their constituents” they continue to promote policies that hurt those exact communities. Even the famous Cuban dissident group, Las Damas de Blanco, or “Ladies in White” have made a statement against these malicious initiatives coming out of the House Appropriations Committee. According to a translation done by South Florida Blog, “On Two Shores,”  co-founder of the Ladies in White, Miriam Levia, and former Cuban political prisoner Oscar Espinoza Chepe said:

“Cuban-American lawmakers have great merit, but in their positions towards our country, are unfortunately disconnected from the needs of residents on the other side of the Florida Straits. Cutting travel and remittances seriously affects the Cuban people, NOT the Cuban government, which would use it again to justify its totalitarianism and repression. We strongly support the popular diplomacy measures taken by President Obama towards Cuban residents in the Cuban archipelago. To call for their elimination is counterproductive and betrays an ignorance that millions of Cubans eat, wear shoes, dress and fix their homes, and hundreds of self-employed businesses have been able to open, thanks to remittances, which are highly valued and appreciated.”

As Miriam Levia says, there is a serious disconnect from Cuban-American lawmakers and the reality of life in Cuba. Last April, these members of Congress took time to sponsor an event honoring Berta Soler, the new leader of the Ladies in White, and used her presence as an opportunity to demand changes from the Cuban government, while at the same time they are encouraging laws that would negatively impact these dissidents and other marginalized groups in Cuba, not Raul or Fidel Castro. Where is the rational to create policies that would hurt their own constituents and their extended families?

Cubans on neither side of the Florida Straits support these measures to restrict travel and remittances to Cuba. The call for engagement with the Cuban people is the majority opinion of U.S. citizens.  These Cuban-American members of Congress represent a diminishing minority of opinion, and by pushing out laws such as those from Rep. Diaz-Balart, you can sense their sense of urgency to make a mark within their numbered days of dominating foreign policy towards Cuba.