What’s going on with people-to-people travel?

People-to-people travel has been one of the few successful elements of our current policy towards Cuba.  Now, that could all change. 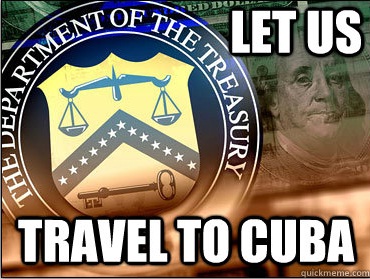 f about 140 existing people-to-people travel licenses are languishing in the bureaucratic depths of the Office of Foreign Assets Control, pending renewal.  And we know of only three that have been renewed. In 2010-2011 we worked tirelessly to re-instate this category of travel and we will not stand by quietly and watch it shrivel and disappear.

Tell the Office of Foreign Assets Control and the Cuba Desk of the State Department to comply with regulations that President Obama authorized in 2011—and to retain the original intent of the people-to-people licenses without bureaucratic excuses and tangles!

The original application for a people-to-people license consisted of six pages in which you had to provide a sample itinerary and explanation about how trip activities would promote true interactions with the Cuban people.  But as of May 2012, OFAC has tightened up the application process, making it  even more tedious, and averaging about one hundred pages in length.

Why the change? In short, Florida Senator Marco Rubio continued to block the confirmation of Roberta Jacobson as the Assistant Secretary of State for Western Hemisphere Affairs until the administration addressed his concerns with the people-to-people program. His unfounded complaints? That illegitimate organizations are receiving licenses and primarily meet with government-employed Cubans and that this is purely a way for tourists to get to Cuba who are “curious about Cuba and, at worst, sympathize with the Cuban regime.”

Don’t allow one member of Congress to take away our right to travel. Email OFAC and the Office of Cuban Affairs at the State Department to tell them to enable President Obama’s people-to-people program.

After being confirmed, Roberta Jacobson testified before the Senate Foreign Relations Committee Subcommittee on the Western Hemisphere and defended Obama’s current Cuba policy ,“The administration’s travel, remittance and people-to-people policies are helping Cubans by providing alternative sources of information, taking advantage of emerging opportunities for self-employment and private property, and strengthening independent civil society.” Her testimony proves that the White House still supports and promotes its policy of engaging with Cuba, and therefore, OFAC should be carrying out its mandate of processing licenses.

As Ellen Creager from the Detroit Free Press wrote earlier this week, “Whether you are pro-Cuba travel or anti-Cuba travel, this whole thing should concern you a lot. There is something sinister to me about preventing citizens from traveling, then allowing them to do so, then throwing giant roadblocks to prevent them from going after all.”We need to make a splash with this action in order to get the attention from OFAC and State. Please forward this email to as many friends and share our action on Facebook here!