Why Cultural Exchanges with Cuba Matter

These remarks were originally presented at a congressional briefing on March 20th, 2013 titled “The New Miami-Cuba Reality: Is It a Game Changer?” This briefing by Cuban Americans from south Florida discussed the new Miami-Havana reality — and why the U.S. and Cuban governments must seize the moment to start talking about solving their myriad bilateral disagreements.

In 2002, I participated in an exchange program organized by Silvia Wilhelm of Puentes Cubanos, which consisted of a small group of Cuban-Americans (all from Miami) and an equal number of Cuban counterparts in a weeklong intensive encounter at the University of Havana. There, we debated, discussed, expressed and exchanged ideas about what being Cuban meant to each one of us present. The focus on cultural identity and all the complex emotional issues it brought to the fore had far reaching consequences for everyone involved. In my case, this experience marked a before and after and one that has driven the thrust of much of my subsequent personal and professional endeavors. 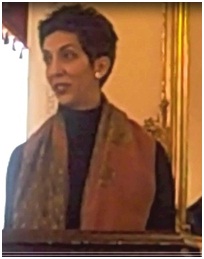 For Cuban-Americans like myself, who were born there but raised here or second and third generation offspring of Cuban parents born here, our relationship to Cuba has been largely shaped, in the personal realm, by the memories of others – borrowed and inherited, from our parents and families; and from a broader socio-political realm, our perception and understanding of Cuba has been the product of the failed and inefficient policies dictated by the two countries. On either account, we have been kept from forming our own (informed) opinions, impressions, political or otherwise, about Cuba on our own terms. What an exchange program like Puentes Cubanos granted us was a space (physical and intellectual) and the allowance to not only share our individual stories with one another, but to wrestle with our respective emotional and psychological trappings. This “space” allowed us to engage in an honest process through which we tried to confront who we were and the realities we each represented – encumbered and burdened as they were by the sentimentality of the past or the biased rhetoric of political agendas. To wrestle with these contradictions, to reconcile what we had been told about Cuba with what we were experiencing, to question things about one another that made us feel vulnerable allowed us to conjure up our own image of Cuba, to become informed based on what we experienced, not others. As both a discursive platform and an opportunity for real people-to-people contact, cultural exchanges, therefore, are unique sites with the potential to function as powerful catalysts at a grassroots level and can be understood as a microcosm for what can be replicated on a macro level, in other words, at a policy-making level where they can affect change. Just as important, cultural exchanges provide the opportunity for cultivating the following three key principles: 1) mutual understanding (we are no longer an abstract concept to one another but real persons who are linked to shared experiences) 2) respect (with information, understanding and knowledge and even exchanges comes respect) and 3) trust (meaningful and honest exchanges between two people from opposing realities that seek common ground yields trust). I believe the road to normalizing relations with a future Cuba has to start with these principles. These have been the markers through which I have been able to establish a strong network of contacts on the island that have helped me develop subsequent professional initiatives and pursue personal endeavors.

As a result of my experience through Puentes Cubanos, I was propelled to channel my desire to create opportunities for exchange with artists living in Cuba and those in the diaspora through my curatorial projects; and as a scholar to uncover areas of research that have been previously ignored. In 2003, for example, I curated an exhibition at the Spanish Cultural Center in Miami titled The Parallax Effect. The exhibition featured three photographers living in Cuba and three living in the United States. The title, which referenced a photographic term that describes the apparent change in position of an object when viewed from two different points of views, metaphorically alluded to the different perspectives that each group represented. The following year, I worked with the Cuban Research Institute at FIU on a program titled Culture on the Edge funded by the Ford Foundation aimed at creating a platform for exchange between artists living in Cuba and the South Florida community. Subsequent trips to Cuba focused on the topic of my thesis research, Cuban photography of the 1970s, where I met with image makers from that generation and discovered a remarkably autonomous body of work, which had been virtually ignored, produced outside the confines of the polemical and repressive cultural policies of that decade. All throughout these trips I have met with key individuals involved in Cuba’s cultural sector, and forged working relations with museum curators and art historians, artists and photographers from older generations, as well as contemporary ones. With every trip and each project, I’ve become more informed about Cuba’s cultural and social post-revolutionary history, which has sharpened my expertise on the subject of Cuban visual culture. But, just as important is how these experiences have allowed me to carve a space out for myself, there, and be recognized 1) as a scholar of Cuban art and a fellow colleague, and secondly and perhaps more pointedly as a Cuban-American. In every professional and personal interaction, I am negotiating my identity as both a Cuban and an American, helping to dispel stereotypes and received notions about who we are, but also, in the process endeavoring to make a meaningful contribution toward a renewed, more inclusive and nuanced future Cuba narrative.

So, what does all this mean today? How do cultural and educational exchanges continue to be meaningful in Cuba’s changing society?

On a recent trip to Cuba this past January with a group of students from the Art Institute of Chicago, where I co-taught a course on cultural politics with a fellow colleague, I was reminded once again about the powerful dimension of cultural and educational exchanges and the value in remaining informed, now more than ever as Cuba enters into a new, albeit slow-moving and uncertain, chapter. Because of our contacts on the island, my colleague and I were able to put together an extensive itinerary that exposed the students to one-on-one encounters with a wide range of actors in the cultural sphere from the office of the Ministry of Culture, to members of an independent alternative initiative in San Agustin, a community on the outskirts of Havana. Our students, who were a group of art historians and cultural policy majors, learned first hand about how Cuban artists are experimenting with new economic models and how these have influence the manner in which artists displayed and sold their work; we looked at how social practice and the arts might mean in a society that straddles socialism and a hybrid form of capitalism; they heard from artists who have been remarkably successful abroad while still residing on the island and are now investing in property in Cuba; they learned from a gallery and auction house director about the major profits these entities are garnering and the role the government plays in the opening up of these enterprises; and heard from professors of a previous generation of artists about how a growing and thriving art market has affected the quality and content of the artistic production of a younger generation; and visited with scholars and historians from older generations who are also actively involved in staking a place for themselves in a society that is rapidly changing, while still fraught with the uncertainty of its future.

And yet the longstanding policies that have defined US/Cuba relations have been counterproductive toward affecting any real change or forging a future working relationship. In their shortsightedness, the policy makers have been unwilling to understand that the more we provide tools for both Cubans and Americans to become informed about one another the more we facilitate opportunities that provide the context for an even and respectful exchange. Better yet, for a place at the table in a future Cuba.

I’d like to provide one last, but poignant example that I think illustrates the impact of people-to-people exchanges. Our tour guide Nadia, who led us on this recent trip to Cuba with the students from the Art Institute accompanied the group on all our visits and also served as translator. As such she witnessed the varying opinions, some more contentious than others, that each of the persons we visited shared with us. During the course of the trip, she grew visibly more interested in the content of our visits and engaged with the students and myself in a much more personal way, asking questions and sharing her own views about Cuba, as someone who is committed but constructively critical of her society. On our way to the airport, she thanked the group for showing her a side of Cuban culture she didn’t know. And tearfully asked that when we returned to our respective lives in the United States that we too share our impressions of Cuba, both the positive and the negative for in that reciprocal exchange, she said, laid the future of Cuba.

Elizabeth Cerejido is a Cuban-born; Miami based independent curator and researcher of Latin American and Latino art who specializes in Cuban and Cuban-American art, visual culture and cultural politics. Her research examines how issues of cultural identity manifest in cultural production. She holds an undergraduate degree in Art History and a Masters in Latin American Studies and Visual Culture from the University of Miami. Cerejido has participated and organized numerous cultural and educational exchange programs in Cuba.