Women’s Voices and the Colombian Peace Process: We Must Sweep away the Culture of War 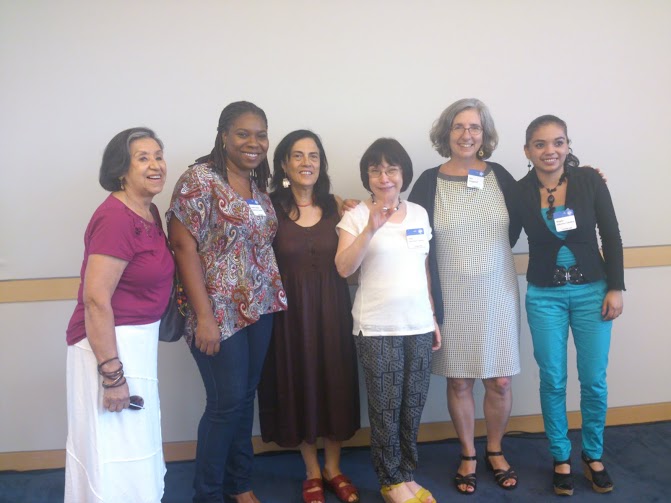 Olga: Women have always played an important role in the search for peace. Even though women were not always present at the negotiating table and while their contributions are not always seen or recognized, it’s important to acknowledge them. On the government’s side, women have played a big role in the peace process, especially when it comes to the debate on justice and even in drafting of the preliminary agreements. Women in the insurgency have also played a big role; however, they are often discriminated against during the peace talks. They are seen as secondary to insurgent men and their contributions and responsibilities are often not mentioned. Therefore it is important that we not only change the way we view women in the insurgency, but how we view women in general. We as individuals, along with the democratic institutions of the Colombian government, must break away from the stereotypes and change the way we think of women and their political participation.

We as women believe three things. 1) The importance of women in the peace process. Peace will not be possible if we women are not included. 2) Peace in Colombia is not the end of the conflict but the transformation of Colombian society. We are not idealists and think that there will be peace the day after the treaty is signed. We know that is not going to happen overnight because war has been going on for over 50 years. It will probably take 100 years before a lasting peace is fully achieved. That lasting peace can only be achieved by changing the mindsets of people. Yet we have to be realistic and be aware that this will take many generations. 3) Lastly, the historical memory of women also counts. There is not just one shared, national historical memory; there are many of which we women are the conveyors, not only as victims but also as active subjects.

Magda: We (women) have tried to influence the peace process on various levels. We as women feel the need to be heard and to tell our side of the story. This is why we organized a National Summit of Women for Peace. The summit, which took place from October 23rd to 25th in Bogotá, included about 450 women of all ages, ethnicities, and sexual orientations from 30 of the 32 departments of Colombia.

We did a series of workshops where we discussed the six points on the negotiation agenda from the point of view of women. The summit centered on a theme which we think is very important: the implementation of the accords. Some of the conclusions we reached at this summit was that this process must reach all sectors of Colombian society so that we can all take possession of the peace process and make it our own. In Havana they are only signing a treaty; they are not implementing it. Although this accord will give us the tool to amend many wrongs, it is not going to build peace. Peace must be built within each of the individual departments of Colombia, starting with each individual person. This war has been so cruel and each of us has experienced it in a different way. This is why we as individuals, not the negotiators in Havana, are going to be the ones who will actually build and implement peace.

During the summit we talked about the six points of the negotiation agenda, but from a woman’s point of view. For example, we talked about political parity, which is something that is not well accepted in Colombia, as we can clearly see from our political institutions. We also talked about women’s access to land because landownership in Colombia is mostly for men, even though we women are the ones who have tended to it while men have been off fighting in the war. We are concerned that women will be forgotten when the government and the guerrillas redistribute land. Lastly, we talked about the effect of illicit drugs as well as the effect of drug trafficking culture on women’s bodies.

One of the key accomplishments of the summit was the appointment of Nigeria Rentería as a member of the government’s negotiating team. Before the summit, women were completely excluded from the peace talks. Although women at the table–like Nigeria—do not represent civil society as a whole, the appointment of women negotiators assures us that both actors will hear our points of view and take them into account. However, we are still asking both actors to let some of the women who were at the summit be present in Havana so that we can speak for ourselves instead of having to do so through a third party.

I now want to talk about the culture of peace in Colombia. For us, the culture of peace involves the conflict no longer feel like the normal way of being. It is not an easy thing to do because, sadly, we are so used to living with the conflict; we hear about it so much in the news that it just becomes part of our everyday lives. It no longer affects us like it would someone who has not lived in a war-torn country. So how do we set about accomplishing this Herculean task? This involves something we call “pedagogy of peace.”

We encourage families, schools, and communities to engage in symbolic activities which aim at de-normalizing the conflict. For example, a popular superstition in Colombia involves putting a broom behind the front door so unwanted house guests will leave quickly. In many regions of Colombia, women, in an attempt to resist the conflict, have put their own spin on this superstition: they put brooms behind every door in their houses so that the unwanted guest –the armed conflict—will leave and not affect their communities. Another exercise involves “sweeping” the war out of our homes, much like you would dirt in your house.

Danny: In the past, many countries have contributed to the armed conflict in Colombia. Today, it is necessary for those countries to contribute to the peace-building process. In Colombia there is great territorial, cultural, and ethnic diversity. As a result, the dynamics of the conflict have not been homogenous. Within that diversity, there is a socioeconomic inequality which often goes hand in hand with racial inequality. This inequality is one of the causes of the conflict. Some of these people live in the poorest parts of Colombia where there is a lot of exploitation of natural resources. This criminal exploitation of natural resources–which include both licit and illicit resources—discriminates against certain ethnoterritorial or ethnoeconomic populations. The same people who have been discriminated against structurally within Colombian society are also the most affected by the armed conflict and its dynamics. If we look at displacement statistics most of those displaced tend to belong to these populations: they are poor and/or of Afro-Colombian or indigenous descent.

The challenges we face as women in the construction of peace is to start building a culture of peace. Most Colombians do not know what peace looks like because we have not known anything else in Colombia. For as long as we can remember we have lived side by side with a war that is over fifty years old. Therefore building this peace and transforming Colombian society is our biggest challenge. We must also change stereotypes about race and gender; if stereotypes were not as present in the dynamics of war, then we women would not be the biggest victims of war, and specifically of sexual and psychological violence. Lastly, we must also find a way to reach social reconciliation without forgetting what has happened. Even though we do not want to have to swallow our pride, it is something women and Colombians in general must learn to do, so that we will be capable of forgiving and healing ourselves. Peace must be built from the ground up. It must start with each individual, each community, and each department, so that it can be a lasting peace.