This fall we’re gearing up for a confrontation with our longtime opponents in Congress who are trying everything in their power to maintain a grip on Cuba policy. Again, they are hoping to undo President Obama’s eased travel regulations and eliminate people-to-people travel. We cannot let that happen. 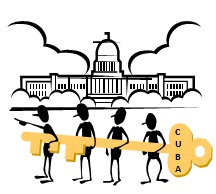 Throughout the years, you have taken action and spoken out on behalf of changing our current policies towards Cuba. You have shown members of Congress and administration officials that not only do the majority of Cuban Americans want to see a changed policy, but a large majority of U.S. citizens is demanding change as well! Poco a poco, little by little, we are seeing those who have in the past dominated the conversation over policy towards Cuba slip in their ability to rationalize the failed policy that they have been promoting for over 50 years.

We’ll also be advocating with the White House to take all executive action allowed under the law to move U.S. policy toward Cuba in the correct direction. The President has a substantial menu of orders he can issue to improve Cuba policy. Eventually, Congress has to act; but waiting for this particular Congress is like waiting for the mountains to fall into the sea. We’re working with the faith community, the non-profit community, the Cuban-American community, the business community, and allies in both the House and Senate to send messages to the President that “we’ve got his back” on presidential action to change Cuba policy.

The Latin America Working Group has been advocating for a changed policy towards Cuba since we were founded 30 years ago. This year being our 30th anniversary, we cannot do anything less than continue to push for a humane Cuba policy into 2014. What will this push look like?

• Pressuring the Obama Administration to take an additional step and grant general licenses for ALL categories of travel. We will collect stories of frustration from individuals and organizations that have had difficulty navigating the licensing process with the Office of Foreign Assets Control (OFAC) and show President Obama that this agency is doing a questionable job of carrying out his policy to promote purposeful travel and people-to-people exchange with Cubans.

• Keeping an eye out for developments in Congress so we can prevent cruel legislation from moving us further away from a normal relationship with Cuba.

Please make a donation today to continue to grow our movement for a normal relationship with Cuba!