Together with Colombian and U.S. civil society organizations, the Latin America Working Group issued a memo outlining the promises of and challenges for peace in Colombia over two years after the signing of the peace accord between the Colombian government and the FARC. The memo recommends ways the U.S. government can contribute to sustainable solutions to preserve Colombia’s fragile peace.

LAWG, in coordination with Colombia Human Rights Committee and Washington Office on Latin America, brought a delegation of Colombian human rights defenders to Washington, D.C. in April to shed light on the state of the accord implementation process and advocate for U.S. support for peace. We then worked with Rep. Jim McGovern to draft a congressional “dear colleague” letter calling on Secretary of State Mike Pompeo to support the peace process and human rights defenders in Colombia. Thanks to the dedicated activism of supporters, like you, we managed to obtain 79 representatives to sign onto this crucial letter!

Below is the executive summary of the policy memo. You can read and download the full text at lawg.org/colombia-wake-up-call. 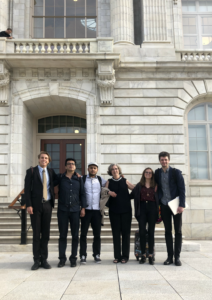 Two years after the signing of Colombia’s peace agreement, the Colombian government’s lackluster implementation of the accord and declining international attention threaten the construction of peace. The FARC guerrillas were successfully demobilized and violence levels dropped in many parts of Colombia. However, plans to increase the government’s presence in conflict zones, reintegrate ex-combatants into civilian life, and dismantle other illegal armed groups are proceeding too slowly. Commitments to address the needs of the rural population for land have stalled in Colombia’s legislature and victims’ rights are far from their promised place at the center of the agenda. Many areas of the countryside are still in conflict, and violence will surge if commitments to address the root causes of the conflict are not fulfilled. The most visible symbol of the peace accord’s troubles is the assassination of 164 human rights defenders in 2018.

If implemented well, this peace accord would end the Western Hemisphere’s longest-running conflict—a war that has cost the lives of over 261,000 people and forced nearly 8 million to flee their homes, a level of internal displacement on the order of Syria. The accord offers a roadmap to modernize and incorporate abandoned rural areas, sustainably tackle illicit drug production, trafficking, and organized crime, and address deep-seated issues that fuel violence and inequality.

This Wake-Up Call outlines the promises of and challenges for peace in Colombia and recommends ways the United States can contribute to sustainable solutions. If U.S. policymakers act boldly to encourage compliance with the accords, it is not too late to preserve Colombia’s fragile peace.