Deported Back to Limbo: The Forced Exodus from Mexico

In December 2014 the Latin America Working Group Education Fund (LAWGEF) and Center for International Policy (CIP) traveled to Honduras to investigate how the country is responding to the needs of its citizens. This is the first post in a series of seven detailing what we found. See here for an overview of all upcoming articles. 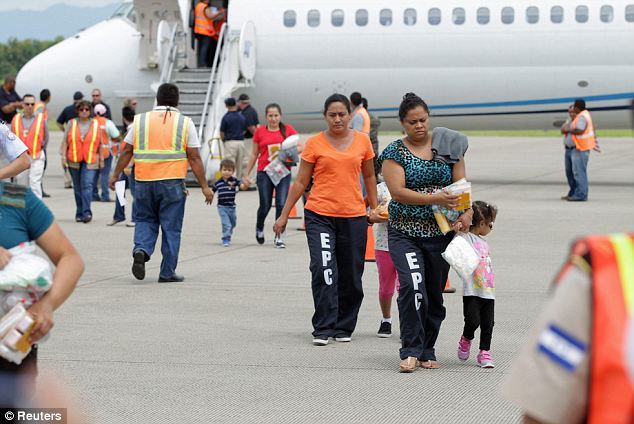 What awaits Honduran children, men and women as they are deported from the United States and Mexico? Latin America Working Group Education Fund and Center for International Policy staff in December 2014 checked out what is happening on the ground.

Deported migrants from the United States step off the plane in San Pedro Sula and are bused to the nearby Center for Returned Migrants, run by the Scalabrini Sisters and a group of volunteers. Men and women, mostly young, clutch a red string bag provided by U.S. authorities, with their few belongings. Many are wearing shoes with the laces removed or prison shoes that they were issued in U.S. detention centers.

In the small center, they are quickly processed. They meet with a volunteer to fill out a questionnaire about why they migrated and their immediate needs; are given a printed copy of their birth certificate, as many have lost all documentation; receive a quick health screening; and are given bus fare if needed to return home. The returning migrants are treated with respect, but the services offered to them are minimal.

“What we need is basic government services,” says Sister Valdette Willeman, the awe-inspiring, no-nonsense nun who directs the airport center. People leave due to poverty and violence, and both need to be addressed. “Local governments need to understand what is happening and help their communities. We need small-scale businesses, we need training for women so they don’t just subsist on remittances. We need group therapy for migrants who are deported. We need children to be able to stay in school and there should be after-school programs” to empower and protect children and teens from the violence surrounding them. “That’s my dream.”

As we were visiting the center, the staff was scrambling to deal with a tough situation. A migrant deported from the United States was due to arrive with a supply of oxygen that would quickly run out. Without oxygen, he would die. But the center had no oxygen, and the volunteers were having a difficult time figuring out where to purchase it and how to keep him supplied. He lived in a remote rural area.

The Forced Exodus from Mexico

The real exodus right now, however, is coming from Mexico. In the past year, Mexico’s President Peña Nieto has ramped up immigration interdiction efforts, particularly in the southern border region. Mexico’s National Immigration Institute revealed that 117,491 migrants were detained in Mexico in 2014, more than any year since 2007. Ninety-four percent of those apprehended are Central American, most from Honduras, El Salvador and Guatemala. More than 33,000 Hondurans were deported from Mexico as of September 2014, according to Honduras’s National Human Rights Commissioner. Few, if any, migrants detained in Mexico are screened or provided opportunities to apply for international protection. Many of these migrants are being deported by bus and plane to their home countries.

Countless busloads of Honduran deportees—men, women and children—are arriving from Mexico each week. According to the International Organization on Migration, in one day alone in August 2014, 13 buses full of deported migrants crossed the border. As they cross the border into Honduras at Corinto, there is just one Red Cross station which provides water, a cleaning kit and allows the returning migrants to make one phone call. There are not even toilet facilities. Buses arrive at all hours of the day or night.

From Corinto, children are taken to San Pedro Sula, where they can stay up to 48 hours in the euphemistically-named Eden Center. This center, run by the government’s newly formed child protection agency, DINAF, with assistance from nongovernmental organizations, gives them a place to stay while their families are contacted. They receive printed copies of their birth certificates, meals, a medical checkup and some psycho-social attention. But then they are out the door within two days. If children or youth are at risk of becoming victims of violence if they return to their families or communities, which many of them are, organizations like Casa Alianza can provide a refuge for a few, but there are no services or protection for most.

The U.S. government has encouraged the Mexican government to increase immigration enforcement so that migrants will be stopped before they arrive at the U.S.-Mexico border. The United States is also encouraging the Salvadoran, Honduran and Guatemalan governments to take steps to secure their borders and not permit unaccompanied minors to cross. To make sure this happens, the U.S. government is providing additional funding for border enforcement in Central America and Mexico. As interdiction and deportation by Mexican authorities increases, Mexican migrant advocates are warning that they are seeing increased abuses against migrants by migration, state and federal police authorities. “2014 has been a complicated, terrible year,” noted Alberto Xicontecatl, director of the Casa del Migrante in Saltillo.

The Honduran Government’s Response to the Crisis of Unaccompanied Children

“The Honduran government has just discovered migration” since the media attention on children, says one journalist sarcastically. As immigrants’ remittances are a key prop for the economy, immigration has not really been seen as a problem. More positively, humanitarian agencies note that at least the Honduran government is willing to admit the fact of high levels of migration, refugees and internal displacement.

The First Lady of Honduras has welcomed returning children at the airport, but it does not appear that services for reintegrating children and adults are being substantially increased. According to one children’s advocate, “The government of Honduras has responded to this crisis with publicity, not with programs.”

The Honduran government recently shuttered its child protection agency, the Honduran Institute of Childhood and Family (IHNFA), laying off hundreds of workers. Its replacement, the National Office for Children and Families (DINAF), has been charged with attending to deported children as a major focus. While the old agency was seen as corrupt and ineffective, and DINAF’s strategy of working more via nongovernmental organizations seems to be a positive shift, the reorganization has at least temporarily left a big gap in already scarce services. DINAF has not yet scaled up its staff, and programs like daycare centers run by IHNFA for poor mothers were suspended. While in theory DINAF is supposed to cover all the services IHNFA provided, we watched as a family seeking child services was turned away from the Eden Center. “We only have services for migrants,” said the guard.

Advertisements for a government-private sector jobs program—Con Chamba Vivís Mejor— are plastered across the main cities, but the program only provides jobs, which are often just part-time or short-term, to a lucky few. The program provides two months of wages to businesses to hire new workers but, according to the AFL-CIO, does not monitor whether companies receiving these wage subsidies are respecting labor laws and does not track whether these hirings translate into permanent jobs.

According to the report from an Inter-American Commission on Human Rights December 2014 visit to Honduras, “The Commission was informed about the worryingly weak government response in terms of making children a public policy priority and preventing the factors that push them to leave the country.”

And the U.S. Response?

In 2014, in the face of the crisis of unaccompanied children from Central America, the U.S. government increased pressure on Mexican and Central American governments to prevent migration to the United States, but did not ramp up its own programs to help those governments and societies reintegrate returning migrants or address the root causes of migration. A supplemental FY2014 bill that would have contained such funding never won congressional approval.

The U.S. Congress did include in the Consolidated Appropriations Act for FY2015 an additional $130 million in assistance for Central American countries “to address the key factors in the countries in Central America contributing to the migration of unaccompanied, undocumented minors to the United States.” It contains a stick as well as a carrot, however, with conditions that require the State Department to report on steps that the Guatemalan, Salvadoran and Honduran governments are taking to secure borders and reduce the flow of migrants to the United States, including by warning their citizens about the risks of the journey and the nature of U.S. immigration laws.

There is a real concern that U.S. pressure on the Mexican and Central American governments to toughen border enforcement can lead to increased abuses against migrants. And let’s hope that this additional U.S. funding for Central America is not spent on militarized solutions but rather answers Sister Valdette’s call for the basic human services and protection that Honduran, Guatemalan and Salvadoran communities, and especially children, urgently need.