Does My Story Matter? Seeking Asylum at Mexico’s Southern Border

In a report released today, “Does my Story Matter? Seeking Asylum at Mexico’s Southern Border,” the Latin America Working Group (LAWG) highlights how families, individuals, and children from the Northern Triangle countries of Central America-El Salvador, Guatemala, and Honduras, continue to seek international protection not just in the United States but in other countries in the region. Many increasingly go to Mexico where, in the first three months of 2017, there were more asylum applications than in all of 2015, the majority from Central America.

This flow of asylum seekers demonstrates that the conditions in Central America driving this migration remain largely unchanged—the high levels of gang violence, corruption, and impunity remain some of the worst 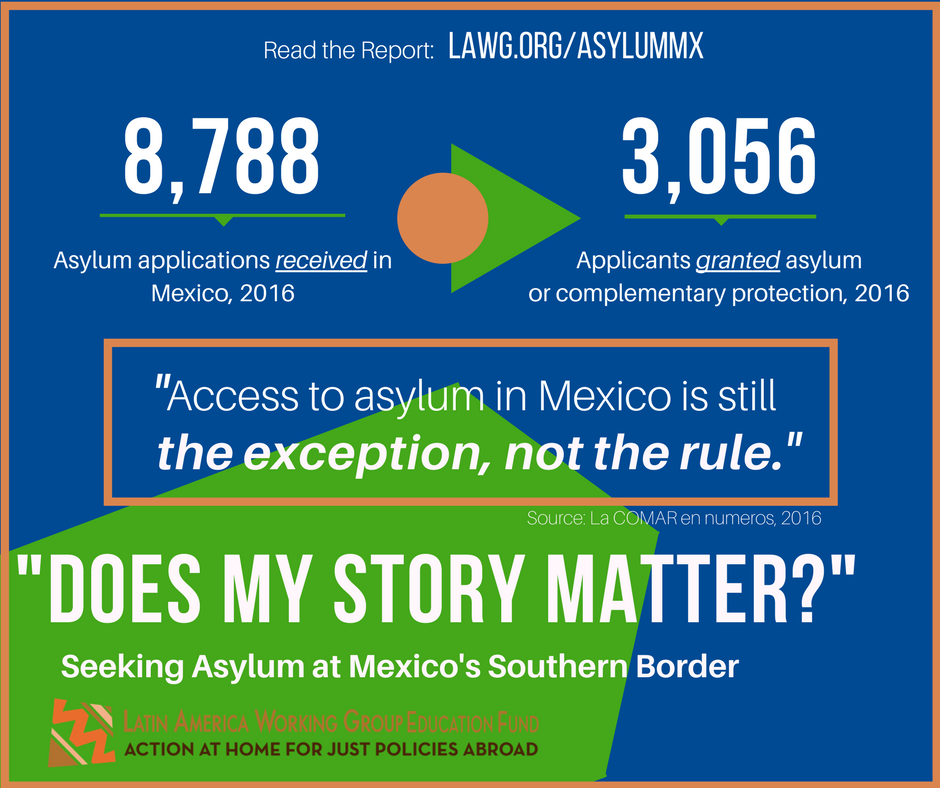 in the world. Nongovernmental reports from early 2017 demonstrate sustained generalized violence perpetrated by gangs and security forces resulting in forced displacement, extortion, sexual and gender-based violence, and severe limitations on access to education for children. Internal displacement due to the construction of megaprojects is another aggravating factor.

The report describes the obstacles individuals face in accessing asylum at Mexico’s southern border from the moment they cross into Mexico and face violence from Mexican migration agents, police, or criminal groups to the hurdles they encounter throughout the actual asylum process. It also describes challenges that persons granted protection face during their life as a refugee along Mexico’s southern border. It includes direct testimonies from Central American individuals once they have arrived at Mexico’s southern border as well as testimonies from Mexican border communities who provide assistance to migrants, international organizations, NGOs, and migrant shelters that are working to ensure access to asylum.

The report confirms that access to asylum in Mexico is still the exception rather than the rule. Mexico’s asylum system must, therefore, be strengthened by increasing resources to grow staffing and coverage for asylum processing across Mexico, expanding alternatives to detention programs for asylum seekers, and ensuring adequate screening and identification of all those in need of protection, including unaccompanied migrant children. U.S. support for improving Mexico’s asylum system should be an integral part of its cooperation with Mexico.

Ahead of Summit: LAWG Urges Regional Collaboration on the Protection of Human & Migrant Rights, not Regional Isolation

Graphic: What is going on at the U.S.-Mexico Border?