Honduras’ Military: On the Streets and in the Government

In December 2014 the Latin America Working Group Education Fund (LAWGEF) and Center for International Policy (CIP) traveled to Honduras to investigate how the country is responding to the needs of its citizens. This is the second post in a series of seven detailing what we found. See here for the entire report. 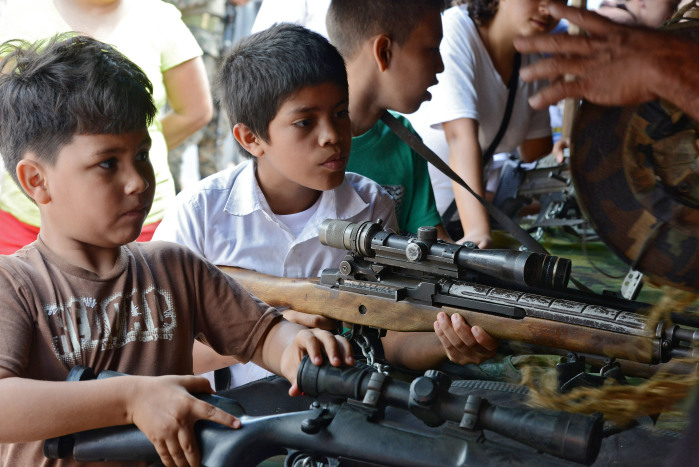 Since Honduran President Juan Orlando Hernández took office in January 2014, gun-toting soldiers have become a fixture in the daily lives of Hondurans.

The military is now in charge of most aspects of public security in the country, and it does not go unnoticed. On the television, advertisements for the military featuring President Juan Orlando Hernández are frequent. Soldiers with rifles draped across their chests are present in most public spaces. Each Saturday 25,000 kids receive training from troops at military installations and militarized parks and plazas as part of the “Guardians of the Homeland” program.

The government says the program is designed to keep youths ages 5-23 from joining the ranks of warring street gangs that control entire sections of the country’s most violent cities. In towns like Cofradía on San Pedro Sula’s outskirts the military will set up bouncy houses and other family-style entertainment.

The most prominent example of militarization is the Military Police of Public Order (PMOP or Policía Militar del Orden Público), whose members have been on the streets since October 2013. The body seems to be the “favored child of this government,” as one local crime reporter put it. There are currently some 3,000 PMOP soldiers deployed throughout the country, but this number is expected to grow to 5,000 this year.

The national police feel the government is not investing in them and is trying to replace them with PMOP, according to civil society experts and journalists. The military squad has better equipment, higher salaries and more benefits than the civilian police. A special law is in place preventing the Attorney General’s regular prosecutors from investigating and prosecuting PMOP soldiers. The National Council of Defense and Security, controlled by the armed forces, appoints the prosecutors and judges that accompany the military police.

Instead of crediting the national police with its successes in capturing high-profile gang members and drug traffickers, the government and media attribute these wins to FUSINA, a task force made up of representatives from the country’s various security units, led by the military. FUSINA manages bodies such as an anti-extortion unit that controls phone intercepts, but as a stand-alone law enforcement agency, it does not exist.

There have also been increasing cases of the military police engaging in murder, torture and extortion. In one incident, soldiers opened fire on a public bus in Tegucigalpa. In another soldiers in San Pedro Sula killed a man, shot his pregnant wife and tried to cover it up. Local press freedom groups relayed several accounts of the military police intimidating journalists and judges. See here for a compiled list of alleged human rights abuses.

“This militarization is the biggest threat to democracy that we have lived,” said Víctor Meza, a former minister of the interior and an expert on security. It was the top concern of nearly every civil society organization, journalist and citizen we interviewed.

President Hernández does not have an exit strategy for using Honduras’ military as police – or seem to want one.  Instead, he has campaigned non-stop to lock the military police into place by adding them to the country’s constitution. Despite Honduras’ Congress voting in January 2015 against enshrining the PMOP into the country’s constitution, the president has resolved to put it to a public referendum in 2017. Until then, the government will continue to channel resources to the PMOP through a classified budget funded by a security tax categorized as “Ultra Secret.” This prevents citizens from knowing how much money the PMOP receives and for what purpose it is being used.

While the PMOP is the most visible example, added to the mix is the U.S.-backed TIGRES (Tropa de Inteligencia y Grupos de Respuesta Especial de Seguridad), a SWAT-style militarized police force. Most recently members were found guilty of stealing some $1.3 million of $12.5 million confiscated in an operation targeting the powerful Valle Valle cartel.

But this militarization is more than soldiers on the streets and militarized policing; it is top-down and becoming institutionalized.

For the first time in the country’s history, an active military officer, General Julian Pacheco, was appointed head of the security ministry, which as of 2013 oversees both the armed forces and the police. Due to pressure from the U.S. government, Pacheco has since retired from the military. Prior to his new post, Pacheco headed up the Directorate for Intelligence and Investigation (DNII), and his appointed successor is an active military lieutenant. Pacheco was sub-director of DNII during the 2009 military coup that toppled leftist leader Manuel Zelaya.

More and more, powers once reserved for police are migrating to the DNII, which is controlled by the military-led National Council of Defense and Security. One top security expert expressed concern that the agency is increasingly functioning as a Big Brother-like figure while no one is looking. DNII’s functions now include hosting units focusing on anti-extortion, telecommunications regulation and so-called “confidence tests,” in addition to the U.S.-funded Major Crimes Unit. At the moment, around 200 people work for the DNII, but the government hopes to expand this to around 1200.

Military officials have been placed in several civilian posts under President Hernández, including the head of the penitentiary system, director of civilian aviation, and the chief of customs, among others. President Hernández himself attended military school and is an Army reserve. His brother, Amilcar, is an active colonel in the Army. The Honduran human rights group Centro de Investigación y Promoción de los Derechos Humanos (CIPRODEH) has an excellent rundown of recent militarization in this September 2014 report.

Civil society groups, activists and scholars all expressed concern that the country was slipping back to the 1980s, when the military enjoyed almost unchecked power. It was not until the mid 1990s that civilians assumed control of most state agencies.

Former Supreme Court Judge Guillermo López says that while militarization of public security is a grave concern, the militarization of the justice system is even more troubling. Not only are soldiers policing prisons, but high-profile organized crime cases are now being prosecuted in military barracks, where prisoners are sometimes also held.

The government touts a decline in the murder rate in the last few months.  However, this is difficult to evaluate, as the government has restricted information flows to the independent Violence Observatory of the National Autonomous University of Honduras, which has served as the main source for these statistics.  Corpses in plastic bags, tied up and strangled, continue to be found throughout the country, according to a source in a city morgue. Some analysts reported that while the presence of the Military Police may temporarily scare criminals away from patrolled neighborhoods.  But, they cautioned, criminals return when the patrols move on.

And the Military Police is no answer to proper police investigation.  Crime reporters and security analysts told us that the Military Police have little or no training in chain-of-custody and investigative techniques.  The head of the Violence Observatory in SPS told us, “It doesn’t matter how many soldiers are on the streets if there aren’t investigations and impunity continues.”

Security specialists say that the emphasis should be on getting a reformed, fully purged, civilian police force back on the streets and ensuring an effective and independent judiciary.

As crime remains at crisis-levels in cities like San Pedro Sula, surveys show public support for the armed forces is relatively high compared to other government institutions. But as list of abuses grows, the central problem with this tactic becomes clearer: these soldiers are educated for war, not peace, and putting them on the streets turns each citizen into a potential enemy.