Editor’s Note: This article is the fifth in this series on violence in El Salvador.

The violence gripping El Salvador affects women in a different way than men. Within the current security crisis, gang and security force violence has exacerbated a broader, long-standing acceptance of violence against women. More than half of all Salvadoran women say they have suffered some form of violence in their lives. Over a quarter of these women were victims of sexual or physical violence.

While men are far more likely to be murdered, women are significantly more likely to experience intrafamilial, sexual, or economic violence. To make matters worse, women receive little to no guarantees of protection from the state. Due to ineffective governmental institutions, corruption, and social acceptance, impunity reigns in nearly all cases of violence against women.

At work, many women face discrimination and abuse ranging from wage and pension theft by business owners to extortion by gangs. More than half of all working Salvadoran women are employed in the informal sector, placing them at higher risk of exploitation and extortion because the state does not regulate these jobs.

Women often face the highest levels of violence in their own homes. In the first nine months of 2015, the Attorney General’s Special Attention Unit for Women attended to 1,283 cases of intrafamilial violence against women. While this represents an average of almost five reports each day, the true number is almost certainly higher as many cases of domestic violence go unreported.

The prevalence of sexual violence against women in El Salvador is also staggering. Between January and August 2015, the National Civilian Police (PNC) registered an average of nearly five cases per day of sexual violence against women, including rape and sexual assault. And victims are often the most vulnerable—more than half of these assaults were carried out against girls, adolescents, and the disabled, as seen in the graph below. 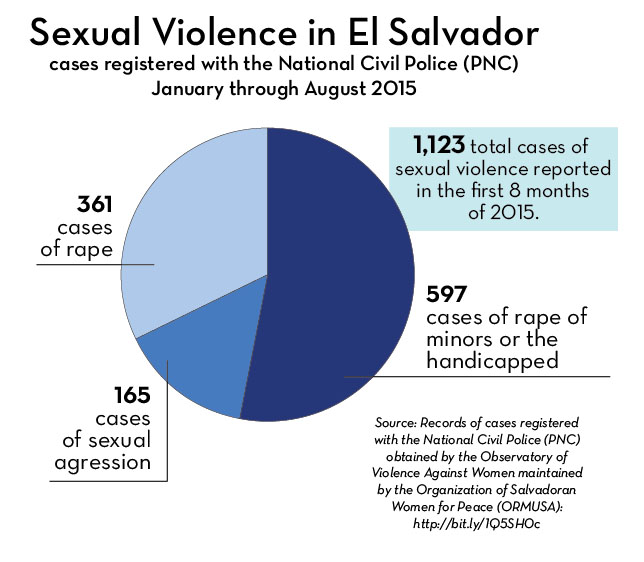 On top of the everyday violence already faced by women, ongoing gang conflict has led to an increase in some of the most heinous acts of violence against women. In the past, sexual violence was primarily committed in the home by a family member. Now however, rape and sexual assault are increasingly committed by gangs and security forces.

Gangs rape and violently murder young girls, or claim them as “novias de las pandillas” – “girlfriends” of the gangs. “Women’s bodies were treated like territory during the civil war and continue to be today by the gangs,” says Jeanette Urquilla, the director of the Organization of Salvadoran Women for Peace (ORMUSA). In many gang-controlled neighborhoods, young girls expect they will be raped, abducted, and/or murdered by the gangs. Urquilla says this has led some families to pressure young women to become pregnant with their boyfriends, rather than be claimed by a gang member.

Police officers and soldiers stationed in “barrios calientes” –high-violence or gang-controlled neighborhoods—have also been linked to cases of sexual violence. In one case, a 13-year-old girl with Down syndrome was raped by soldiers stationed in her community, according to eyewitness reports from members of a human rights group. In another case, a soldier was arrested in February 2016 on charges of abducting, raping, and threatening the life of a young woman.

As “mano dura” or heavy-handed policing expands in El Salvador, the targeting of teenage boys suspected of gang affiliation is also having an inadvertent impact on women. Female family members who attempt to protect their male relatives from arrest or harassment are being threatened and attacked themselves. In a recently released documentary, a VICE News camera crew captured a raid on the home of a suspected gang member where the women and children were visibly intimidated by the presence of heavily armed security forces entering in the middle of the night.

The targeted killing of women based on their gender, known as femicide, is also on the rise. An estimated 2,521 women have been murdered in El Salvador since 2009; this represents an average of 420 femicides each year. And according to the Observatory of Violence Against Women, the numbers are escalating. In the first ten months of 2015, 475 women were murdered – an average of one femicide every 16 hours, as seen in the graph below. 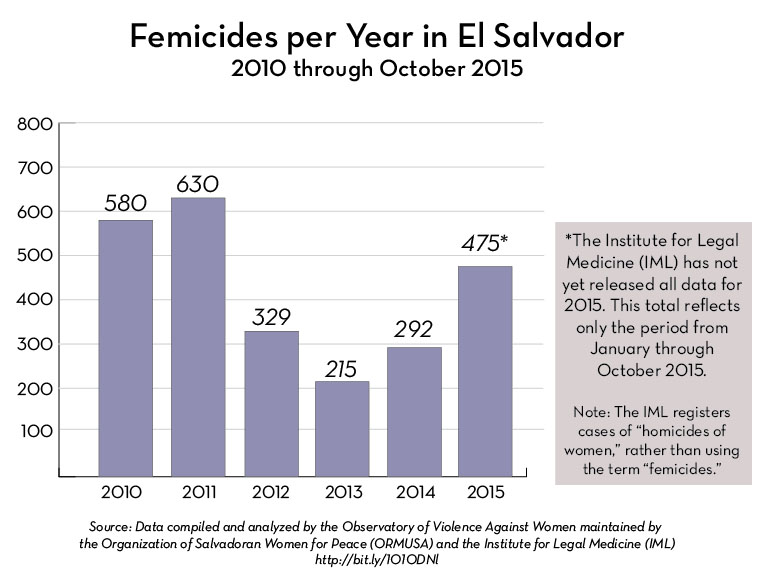 For many reasons, women often don’t report violence. Vanda Pignato, El Salvador’s Secretary of Social Inclusion, told La Prensa Gráfica that women stay silent because of “fear, shame, terror, and above all, because they do not trust the judicial system. The judicial system in El Salvador leaves much to be desired on this issue. There is widespread impunity for aggressors and that isn’t a good message for young people and the female victims of violence.”

Even officials within government institutions sometimes commit violence against those they are charged to protect. Patterns of impunity validate this “masculinity” within the institutions, which leads to further violence, says a program coordinator for ORMUSA. In 12 percent of the cases of violence against women reported to ORMUSA, the alleged perpetrators were judges, prosecutors, lawyers, and police officers. In one case, a woman brought charges against her husband, a PNC officer, for firing his weapon and injuring her. The victim later withdrew her testimony, clearing the officer, even though neighbors and other police officers on the scene heard the attack and witnessed her husband dragging her across the floor.

The Salvadoran government has begun to implement some programs and legislation to combat violence against women. But progress has been slow, in part because the violence is perceived as a social problem outside of the government’s realm of responsibility. Nevertheless, some important mechanisms for addressing violence against women have been created in recent years due to the efforts of Salvadoran feminist organizations. In 2010, the Salvadoran legislature passed a set of framework laws —constitutional provisions that lay out general obligations for governmental institutions— known as the “Comprehensive Special Law for a Life without Violence for Women.” Civil society groups drafted this legislation to address violence against women through “prevention, special attention, prosecution and punishment.” However, to date, less than half of all Salvadoran institutions have worked to implement the law.

Some of these obligations were codified into law in 2011 with the passage of legislation that requires the Attorney General’s office to create “Special Protection Units” focused on intrafamilial violence, gender-based violence, and discrimination against women. These units are supposed to offer legal representation, accept and investigate reports, provide psychological and social attention during the case, and develop a system for referring cases to government institutions and local gender units. The Attorney General’s office also established “Self-Help Groups” to give direct assistance to victims within their local community. These groups provide women with a space to discuss intrafamilial violence and seek help with their cases. Impact studies indicate that these groups have been successful in empowering women to leave abusive relationships.

To date, the police have rolled out eleven local “Gender Units” to provide attention to female victims of violence. These special police units are trained with a gender-focused curriculum and collaborate with local women to create “fear maps” pinpointing high-risk areas and the types of violence specific to the community. The Gender Units are meant to use the fear maps to take targeted actions like increasing officer patrols on a dimly lit street where rapes have taken place. While these special police units have had some success, the constant rotation of personnel makes it difficult for officers to build relationships with the local community. Many women don’t even know these units exist due to limited outreach and a lack of public awareness campaigns.

Although these laws and specialized units represent positive steps forward by the Salvadoran government, they haven’t been fully implemented and access to these programs is very limited. These frameworks also fail to address widespread impunity and do not provide adequate protection for those reporting crimes.
Long-standing institutional barriers continue to block access to programs for reporting and escaping violence. For example, there is little to no access to shelters or relocation centers for female victims of violence. The Salvadoran Institute for the Development of Women (ISDEMU) provides temporary assistance for women fleeing domestic abuse, but it is unable to accept entire families, which discourages many victims from seeking help. In addition, the Inter-American Commission on Human Rights found that Supreme Court centers for reporting domestic or intrafamilial violence are ineffective, inaccessible, and discriminatory.

The United States has invested in “multi-institutional assistance centers” for victims of gender-based violence (GBV), which USAID asserts have “supported efforts to reduce levels of impunity and promote fairness in treatment of GBV survivors.” A sample study of one center showed that of the 99 domestic violence cases received, “all were presented in court and 97 of them resulted in convictions.” While these isolated cases do not reflect an overall change in the levels of impunity in violent crimes against women, it is possible that such models might merit further investigation.

In addition to insecurity and impunity, the country’s healthcare system has placed women at further risk by striping them of legal control over their reproductive health. El Salvador has maintained some of the most draconian abortion laws in the world for over two decades, criminalizing abortion even in cases of rape or when the pregnancy poses a risk to the mother’s life.

Since abortion and miscarriage were criminalized in 1998, 129 women have been prosecuted for “homicide,” including women imprisoned for having a miscarriage or a stillbirth.

The Citizens’ Association for the Decriminalization of Abortion, a prominent organization advocating for changes to El Salvador’s abortion laws, estimates that over 35,000 insecure clandestine abortions have taken place in El Salvador since 1998.

Women’s mental health is also negatively affected by the country’s approach to reproductive healthcare paired with mounting levels of violence. “There’s a correlation between sexual violence and the high rate of suicides among adolescents—that’s the reality,” a Salvadoran health official told Reuters. “Pregnancy is a determining factor behind teenage suicides.”

Suicide is now the third most common cause of death for pregnant women overall and accounts for 57 percent of the deaths of pregnant girls between the ages of 10 and 19.

In spite of national and international pressure on the Salvadoran government to revoke these damaging laws and release the unjustly imprisoned women, the Ministry of Health has blocked advances in women’s healthcare. Urquilla says the ministry fears political backlash from religious and conservative groups, as well as the legislature. These conservative views, while strongest in the ARENA party, stretch across party lines and are shared by some FMLN politicians.

However, El Salvador’s strict anti-abortion laws have been further called into question with the recent and rapid spread of the mosquito-borne Zika virus thought to be linked to birth defects. The Salvadoran health minister has said that from a public health perspective, the total criminalization of abortion is a “true difficulty” that may place women and their babies at risk. However, the Salvadoran legislature has not taken action to change the laws.

The Salvadoran government, in line with several other Latin American countries, has advised women not to get pregnant until 2018, placing the burden of responsibility on women who often have little control over their own bodies due to high rates of sexual violence, repressive laws, and a lack of access to reproductive healthcare.

As security conditions in El Salvador worsen, violence against women continues to increase in severity. To address these issues, the Salvadoran government will need to implement existing legislation, expand institutional capacity, increase protection for victims of violence, and perhaps most importantly, work with Salvadoran civil society groups to begin to shift the cultural, social, and economic dynamics currently reinforcing impunity and acceptance of violence against women.