El Salvador closed out 2015 with 6,657 murders, replacing Honduras as the murder capital of the world. That averages out to over 18 murders a day, a 70% increase compared to the previous year, making it the highest murder rate for any country in the world in almost 20 years. Right now, there is little hope that 2016 will be much better. In January, the country registered 738 homicides, and the government has said murder levels are likely to remain high through the year. Here’s a monthly breakdown of murders, using data from the National Police: 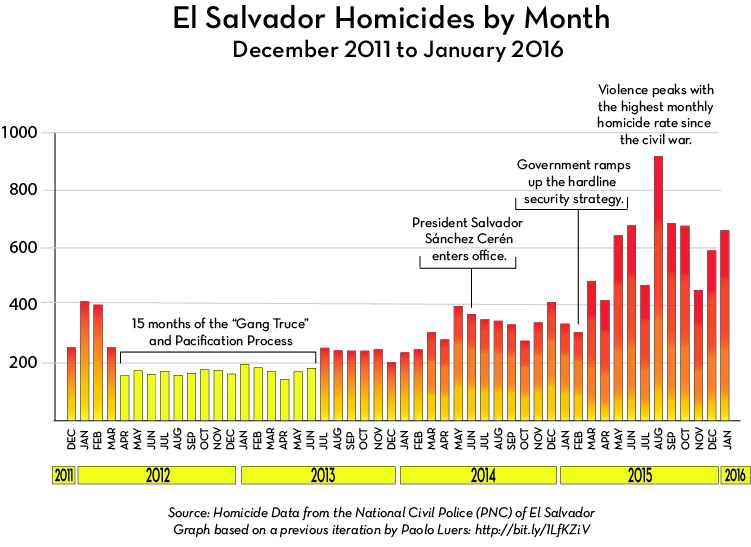 These numbers are alarming, but they incorporate only what the police have documented and do not include unreported murders or the hundreds (or more) of disappearance cases. This violence, paired with a lack of opportunity, has caused Salvadorans, including growing numbers of  women and children, to flee the country in droves. Whether they are refugees fleeing violence or economic migrants without specific grounds to receive asylum is a vital question now part of the U.S. national political debate.  In an attempt to understand the different sources and dynamics of violence, the Center for International Policy and the Latin America Working Group Education Fund traveled to El Salvador late last year. We interviewed journalists, analysts, government officials, judges, police officers, citizens, activists, humanitarian workers, diplomats, and academics. Our series of posts in the coming days will lay out El Salvador’s current security situation and provide recommendations for U.S. policy. These posts will cover:
What we found was evidence of a grim, multi-sided conflict with no clear end in sight: Gangs are now present in each of the country’s 14 regional departments, controlling entire neighborhoods and imposing untold violence and fear on the population. Evidence is emerging that some members of the military and police, now engaged in a war against the gangs, are involved in extrajudicial killings. Many Salvadoran citizens are in favor of the government’s militarized measures and are calling for the gangs’ blood, adopting a ‘kill them all’ mantra in hopes that some sort of peace will emerge once the gangs are gone. But the gangs are a moving target, whose operations involve a substantial part of the population and who continue to re-fill their ranks with young, marginalized boys who have grown up in areas where criminal groups hold more clout than the state.

The Salvadoran government developed a relatively well-regarded plan that promises a more balanced approach to the gangs, but there is little funding for the program and international donors have been slow to buy in. The hard security strategy is what is most evident on the streets.

In the backdrop of all of this, or perhaps driving it, are problems rooted in the legacy of the country’s bloody civil war, which lasted from 1980 to 1992. The problems of social inequality and elite dominance of state institutions that contributed to the conflict are still in place, and it is evident that the inheritance of the use of force as a first resort still casts a shadow over El Salvador. Politics remain extremely polarized, corruption is rampant, impunity is high, transparency is low and justice is rare. But despite all obstacles, a comprehensive, rights-respecting way out must be sought.