On July 28th, 2015, during an event hosted by the Latin America Working Group (LAWG), the Washington Office on Latin America (WOLA), and the Environmental Investigation Agency (EIA), Colombian partners William Aljure and Abilio Peña discussed the impact of oil palm expansion in the context of human rights in Mapiripán, Colombia.

At the beginning of the event, the Commission of Peace & Justice’s video “Entre el agua y aceite de palma” was shown:

The event featured William Aljure, a resident of Mapiripán, who shared his personal experiences with violence and forced displacement in the region, as well as Abilio Peña, a human rights defender and member of Justicia y Paz (Comisión Intereclesial de Justicia y Paz/Inter-Church Commission for Justice and Peace), who discussed the commission’s research findings on the mechanisms used by national and multinational companies to gain territorial control and the effects of these methods on the Llanos region of Colombia. These were their words: 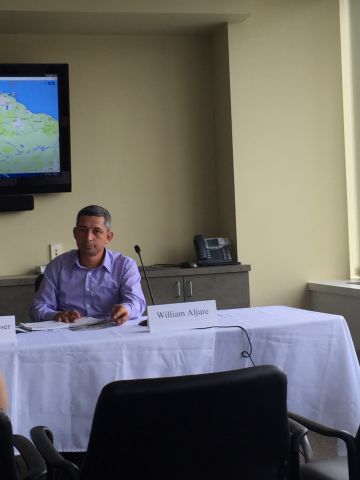 During the period of violence between the liberals and the conservatives in the 1960s, my grandfather was in the military. In the government, there was a peace agreement to disarm. My grandfather surrendered his weapons, and in exchange, the government gave him a farm, Santa Ana of 200,000 hectares. But, the government betrayed him: on Thursday, April 4th, 1968, three battalions of the Armed Forces attacked him at four in the morning. My grandmother and three uncles died. At five thirty in the evening, my grandfather decided to take his life. Later in 1985, the military killed another uncle and in 1990, my uncle, a member of the Unión Patriótica, was killed. In 1997, the paramilitaries entered Mapiripán and committed the infamous massacre.[i] 18 years have passed since the massacre, but the government has not done anything to provide reparations to the victims. The tragedies in Mapiripán and my family continued. My father was killed in August 1997 and later, my mother in 2000.

In August 2012, when my family and I had returned to my grandfather’s farm, paramilitaries approached us, practically holding us hostage, and ordered us to give up the farm. In that encounter, we met the lawyer of the multinational, Italian-Spanish company Poligrow. He presented signed documents that stated that the company had possession of 60,000 hectares of the farm. The following year, in 2013, a worker from Poligrow warned me that the company was planning to threaten my life. Fortunately, at that time, I began to be accompanied by the Commission of Justice and Peace, especially by Albilio Peña. There was no other alternative, but to go to Bogotá with the commission to denounce all that had happened to my family. For me, it was very sad to have to abandon my region and leave everything behind.

In 2014, my wife and I decided to return to Mapiripán and regain possession of my farm. Because I had filed complaints regarding the company to the commission, [a Poligrow representative] came to my house twice, attempting to disprove the commission’s findings and force me to sign a letter giving up my farm. It was scary because the representative is always guarded by the police and the company is guarded by paramilitaries.

The message I want to share with you is that many have lived this story, not only in my region, but in my country. Many people from different communities have approached me, saying: they expelled me from my farm, they threatened me, they forced me to sell my land… So, don’t just look at me, look at the internal problems that exist in my country. 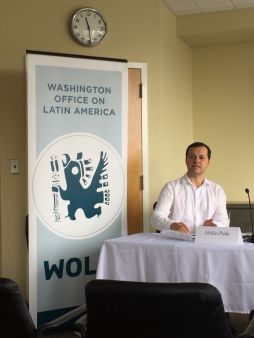 Colombia is the fourth largest producer of palm oil in the world. Colombia transitioned from cultivating 18 hectares of palm in 1800 to cultivating 15,000 hectares in 2012, and the industry continues to grow. Colombia’s territory is open to foreign agro-business investment, without legal limits; this is one of the serious problems being discussed in the peace talks on the topic of comprehensive agricultural development. Companies, like Poligrow, violate Act 160, which establishes that acquisitions greater than 1,840 hectares of land are prohibited.[ii] To bypass this law, corporations create smaller companies that individually buy as much land as possible within the limit. However, as the smaller companies are all owned by the same larger company, it is a way of getting around the law. Another infringement of the law committed by corporations pertains to the application of the Victims and Land Restitution Law. [iii] Under this law, territories that have suffered violence are entitled to special protection [freezing land sales to avoid land being sold due to violent pressure]. The law also states that the commander of the Armed Forces, the commander of the police, and the city council must all be present to sign off on any changes to the law’s application. Instead, [Poligrow] requested that the mayor [of Mapiripán, Maribel Mahecha,] lift the restrictions on land sales in order for the company to acquire more land. The mayor signed an agreement [on May 13, 2008], bypassing the mandatory protections.[iv]

Another irregularity has to do with false partnerships. The Colombian government uses alliances as a mechanism to engage communities in productive investments. However, companies create peasant associations in order to create the appearance of “alliances.” The agricultural representatives of these fabricated peasant associations present themselves as distinct companies, but in reality, they are all part of the same larger company.

Labor rights are also in danger. Labor contracts are precarious and production limits are irregular. Workers report that the corporation constantly increases the production minimum of what one needs to produce to earn money in order to avoid paying them. In addition, the company does not pay social security— the worker needs to pay for it. The company does not assume any responsibility for labor risks. In fact, many documents state that workers had previous illnesses or that their illnesses were due to something other than the work conditions.

Another complex issue [within the palm oil industry] is related to free trade zones: zones free of taxes for imports and exports. A very important free trade zone exists in the sacred territory known as the pink dolphin lagoon. There are plans to introduce an even larger plant for the extraction of palm oil in this territory. In February, we received photographs of oil infiltrating ecosystems; the area has become even more contaminated today, proving how the extraction plant is directly endangering the scarce water supply in the area. The contamination is nothing new. In 2011, the mayor of Mapiripán converted an agricultural zone into an industrial area. The situation is very grave, putting at risk the water supply, traditionally sacred species and the lives of many indigenous peoples in the area. 200,000 [Colombian rodents known as] chiguiros have died of thirst as a result of the absence of water, due primarily to the oil industry. The native moriche [palm tree] absorbs water and allows it to circulate. The palm has a similar structure— when it is thirsty, its roots absorb water. In this way, the palm directly competes with the moriche [an ecologically important tree for local species, including birds, fish, and monkeys that nest and feed on the plant]. The palm is gravely affecting natural resources. The corporation is supposed to be a promoter of palm prosperity, but it takes no corporate responsibility.

[i] In July 1997, dozens of civilians were killed by paramilitaries and hundreds were forced to flee for their lives from Mapiripán, Meta. Paramilitaries worked in conjunction for five days to torture and slaughter civilians. For more on the massacre, see the Latin America Working Group: http://lawg.org/component/content/article/76-stand-by-colombias-victims-of-violence/218-so-far-to-go-human-rights-in-colombia and Human Rights Watch: http://www.hrw.org/legacy/backgrounder/americas/jmv-testimony-0921.htm
[ii] For more on Act 160, the 1994 law passed by the Colombia Congress to establish a system of land redistribution, and the process by which multinational corporations concentrate land ownership, see this 2013 report by Oxfam: http://www.oxfamamerica.org/static/media/files/rr-divide-and-purchase-land-concentration-colombia-211013-en.pdf
[iii] For more on the Victims and Land Restitution Law: http://lawg.org/action-center/lawg-blog/69-general/1443-land-restitution-in-colombia-it-takes-a-minute-to-displace-and-a-minute-to-kill-but-years-to-return-the-land
[iv] For more on the 2008 land purchase by Poligrow in Mapiripán, see Verdad Abierta (in Spanish): http://www.verdadabierta.com/component/content/article/249-especial-altillanura/4553-el-macondo-de-mapiripan#negocio

The Washington Office on Latin America (WOLA) has also published a full recording of the event: