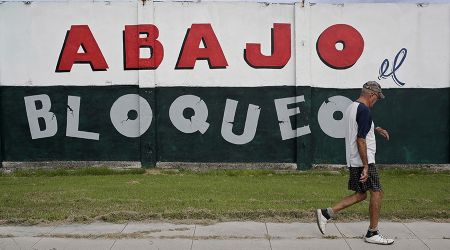 The three nations that the United States had convinced in past years to either vote with the United States or abstain —Micronesia, Palau, and the Marshall Islands— have all restored diplomatic relations with Cuba and voted with the majority this year. Only Israel remained “loyal.” Could that have something to do with the billions of dollars that the United States provides to Israel in aid? Israel is the largest recipient of U.S. foreign military financing.

This year’s vote was the most definitive vote in the 24-year history of the UN’s consideration of Cuba’s resolution. The nations of the world stand together against the embargo.    There had been some speculation in the last few weeks that the United States might abstain from voting, but that didn’t happen. The United States maintained that Cuba’s resolution didn’t recognize the progress made in bilateral relations and asked that Cuba modify the resolution.  Cuba’s foreign minister said that what needs to be modified is the blockade—it must be changed, not the text of the resolution. Stalemate.

However, on a positive note, both countries’ reps say they remain committed to working toward normalized relations.   You can read more about the vote and the speeches made by U.S. Deputy Ambassador Ronald Godard and Cuba’s Foreign Minister Bruno Rodriguez here.

Because UN General Assembly resolutions are non-binding, the value of this effort is an impact on public opinion at the global level; it doesn’t represent anything concrete in terms of ending the embargo. That remains lodged with the U.S. Congress. And with us!

As citizen diplomats, we need to educate our members of Congress and remind them that we elected them to represent us… and we want the trade embargo and the travel ban to end. Now.

We’ll get back to you soon with more actions, but for now, you can call or email your member of Congress to communicate that message. Visit our last action alert to learn how.

Thanks for all you have done so far; it has made a difference! Now is not the time to end our advocacy for a new U.S. policy toward Cuba.